As promised I have made Mister his whoopie pies. He was pretty bummed when I didn't get to them yesterday, so in between trying to open up the hard shell (which I got! just not, ah hem, the "crack the winning combination" way. I literally tried EVERY combination possible and it still wouldn't open. So well, I had to use a little bit of force. Now I'm waiting for mister to get home to see if there is a way he can reset the combination or even "turn off" the lock?)

I have been baking whoopie pies for a few years now. Growing up in NY I had never heard of them, but mister is from Boston and taught me all about them. I have since created multiple recipes for different flavors and even wrote up a business plan to create a whoopie pie truck  - it was a brilliant plan and name I came up with. But sadly there is not a market for it where I live. I live, lets say, in the middle of no where. The truck would do great in a city - Boston, NY, DC etc.. maybe someday I'll get to bring my truck to life when we move to Southern CA (mister keeps hinting at a bog move). Until then I live vicariously through my friend Erica who started up her own cupcake truck out in Providence (xoxo Erica!)

While I am going to keep my recipe a secret - I will steer you toward another whoopie pie recipe in case now you are craving whoopie pies.. 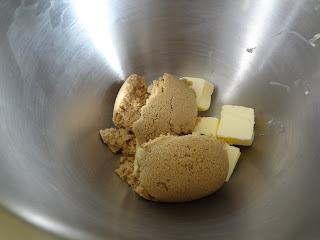 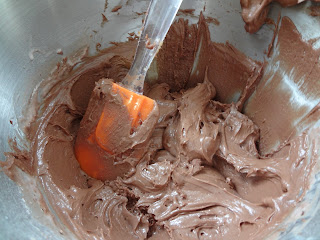 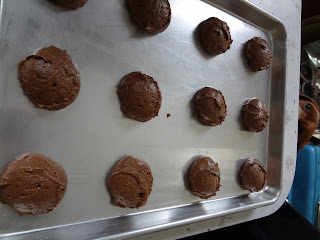 Polly watches my every step during baking - you will see her probably in every baking picture I take unless I crop her watching eyes out! 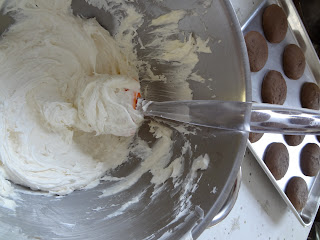 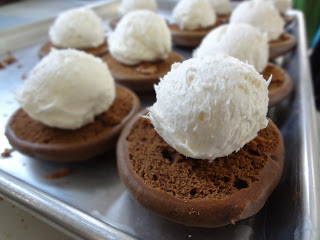 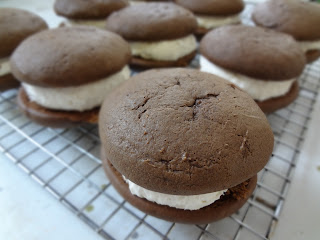 I'm a little sad with how they turned out. I ran out of the normal cocoa I usually use, which gives them a really rich dark color and flavor, so I just used the generic regular cocoa I had on hand. Now go bake some whoopie pies! (or if you aren't a baker, run and support your local baker!)