Our garden progress is actually pretty minimal this week. On Saturday it was truly a gorgeous, perfect weather day. We had headed out to Lowes to get a few small things and planned on working in the front gardens for the remainder of the day. Well.. our plans didn't go..well as planned.

To catch you up and try to make a long story short, we had a large maple tree on our property line. When we bought the house and put in our fence we decided to put the fence on this side of the tree, almost making it look at though the neighbor would have owned the tree. Had we enclosed it within the fence, the fence would have been too close to his property line (those of you that own houses know the fun things like this crap I'm talking about) We for some reason neighbor x has a fascination with cutting trees down and also likes to use chemicals to kill things. (Exact opposite of me and K) Well last year quite a few of the branches fell down off this poor maple. It had gotten some disease that was spreading around up here (and actually has effected a few other of our trees) He offered to cut the tree down. Mind you this is a BIG tree. Like - BIG tree. We kind of brushed it off. I told him we didn't have the money to pay to have someone cut it down (I said this MANY times to him) It didn't look like the tree was dead, and I was hoping it would pull through.

Fast forward to this year. Full leaves aren't out yet, but you could see the buds and the tree actually looked as though it may have been okay - we would have just had to cut off a few branches. So I was happy it hadn't been cut down (plus it was a privacy tree as well) So, yeah, we come home from Lowes on Saturday. Hear a chainsaw and look outside to see neighbor x notching into the base of the tree! Not cutting off any of the HUGE branches, just notching into the bottom. I immediately felt ill. Physically ill. I started pacing, I didn't know what to do. K just put his hands and covered his face. I thought he was going to have a heart attack. We honestly just were in shock. He hadn't even come over to discuss it with us. Just went for it. We were, like I said, going to tell him we didn't want it to come down. So fast forward through some more buzzing and K said some words I won't post and said that the tree just shifted toward our fence! Are you serious!? I almost threw up. That tree definitely would have taken out, well obviously the fence - but depending where it tilted - could have taken out my studio or worse yet our kitchen! The chainsaw then stopped and a few moments later we heard a knock at the door. Neighbor x tells me, I tried cutting the tree down, it didn't go as planned, you are going to have to get someone out here. Literally turns around and walks off my porch. I stood stunned, speechless. So, let me get this straight, YOU are going to cut into MY tree without first even telling us you are doing it, YOU eff up, and now its MY problem?

I am horrible at confrontation. I never say what I am feeling and this is why and how I get walked on all the time. I turned went inside and told K. Now K is pretty quiet too. But he was mad, like fuming mad. I thought he was going to punch this guy. That's all I need is to have to bail him out of jail on top of it all! haha Basically there was some back and forth, well not so much back and forth as just K saying to this guy what are YOU going to do about it. (K is a tad intimidating I think if you don't know him - a 200+, 6' tall, crazy beard wearin, covered in tattoos scary ass guy haha) Neighbor x had a tree crew out within an hour. Basically what the tree crew did was tie a rope around the top of the tree using their crane truck - and some skinny dude PULLED the rope. That was all. PULLED the rope! So basically that tree was standing there, who knows what was holding it up while this was going on. 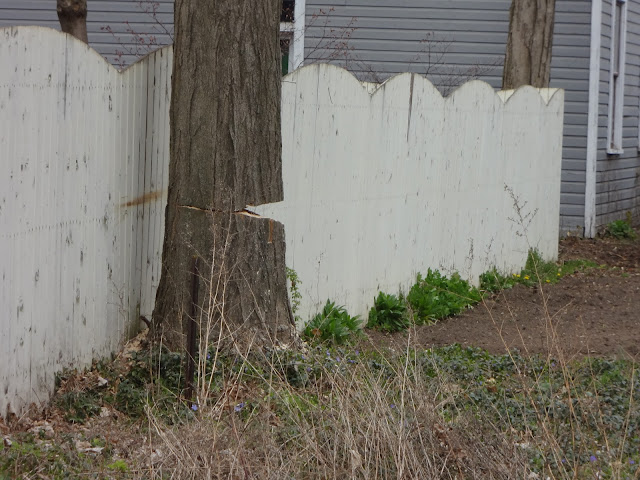 All this nonsense lasted hours. We didn't feel okay until it came down and we knew our stuff wasn't in danger of being taken out. A complete and total waste of a day. K said he definitely lost a few years off his life during that whole ordeal. Oi! What is wrong with people. 1. if you can't do something do NOT offer and tell someone you are going to do it, then eff up and then make it their problem. 2. some things needs to be left to professionals!

Well due to this Saturday was wasted, and Sunday it rained all day. So..no real garden progress happened.

Though I did see the city people picking up my leaves, and asked them about free wood chips - the next day woodchips arrived. 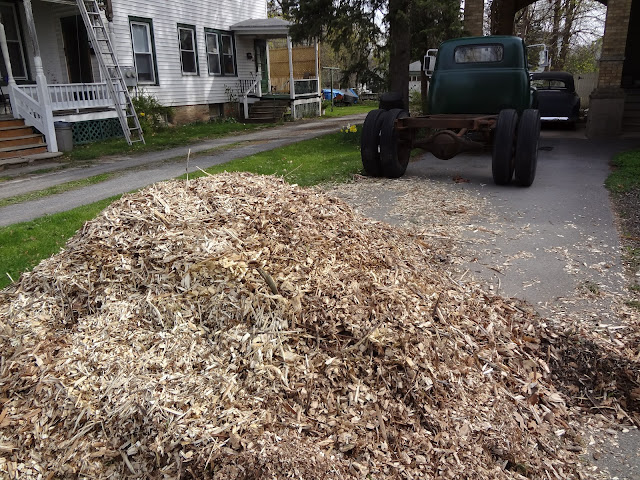 I'm not sure if you know this, but if your city or town collects the leaves and tree clippings from your curb you can more than likely get free wood chips. Some towns even sift them so that than are just nice wood chips. Apparently not our town, I've been pulling out full on sticks from them. But hey FREE!.

Had they been nice chips- we would have used them as mulch for the front yard gardens, but they are a little wonky. Better suited for what we are doing to our back yard. So here is a mini tour of my back yard. 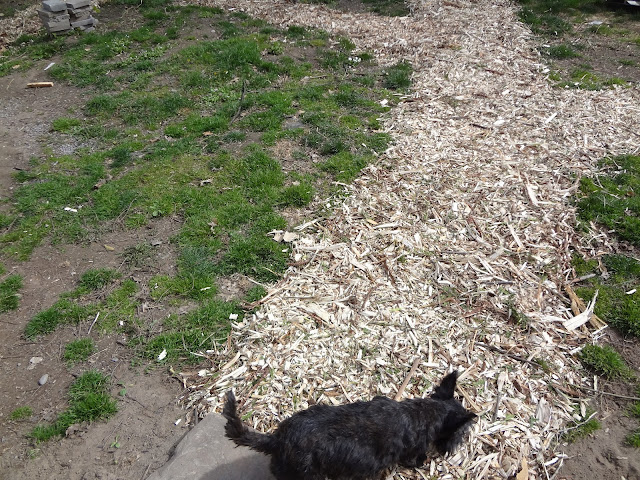 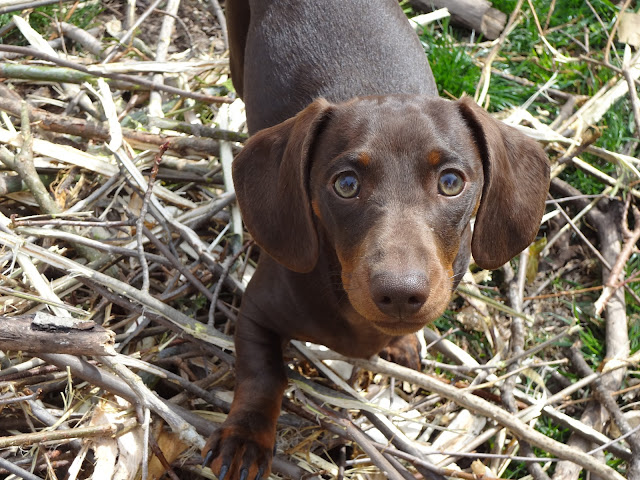 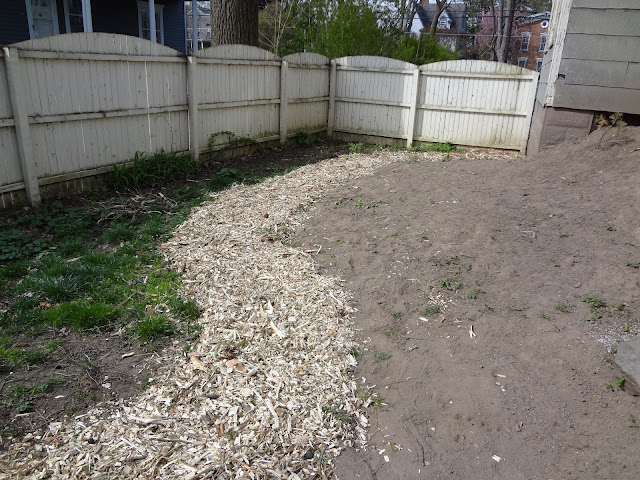 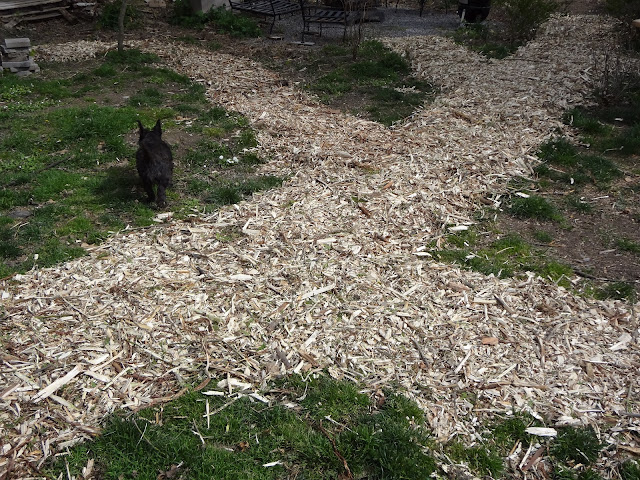 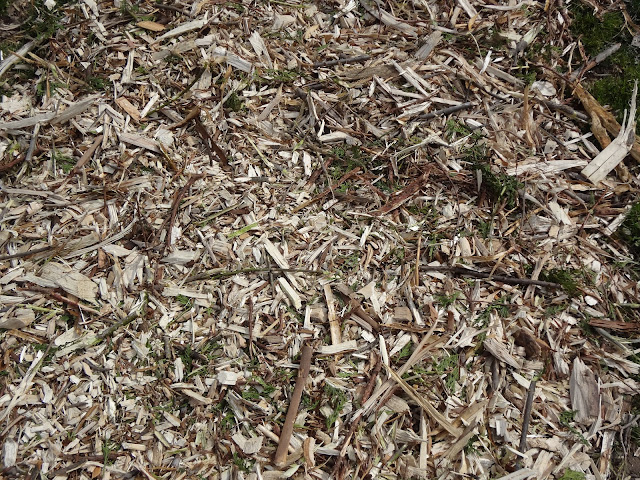 So our back yard, as is pretty much everything in my house, is a work in progress. It's another space that we have transformed too many times to count and still not completed. But K has a "vision" and wants it to be woodsy feel. So we are going to get some pine trees and more trees and just let it grow. We don't want any grass  - it will just become like a forest floor. So these wood chips were perfect. The girls are LOVING them. Ella keeps bringing pieces inside (she's standing in the stick pile in that photo). We know the paths won't remain perfect because of the running on them, but that's okay. We are just laying it out so that we know where to dig and plant the trees and flowers. We still have more than half the pile left so we will probably finish laying it out tonight. It's so hard when you have so many projects going on at one time. If it were just me I would start one thing, finish then move on to the next. I hate juggling all this stuff and never having anything finished.